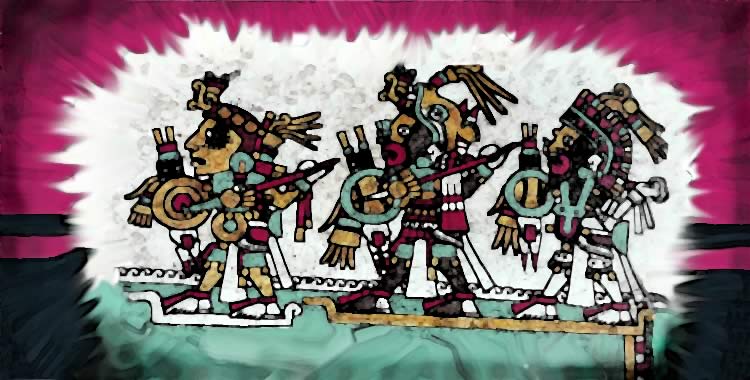 RPGs in a Mesoamerican fantasy setting

Recently, I was fleshing out a nation in my fantasy setting that I wanted to be mostly inspired by ancient Mesoamerican cultures.  I also had a few ideas from gold rush California, Argentinian gauchos, Mexican revolutionaries, and Ancient Carthage thrown in, but mostly Mesoamerica.  It’s a total pastiche, but at least a different pastiche than its neighbor nation that had a Celtic vibe.

Mesoamerica isn’t nearly as popular a setting for English-language fantasy as medieval Europe, but in case you, too are interested, here…

That said, onto complete fantasy escapism!

If you’re interested in playing in an RPG designed specifically for a mesoamerican-themed fantasy setting, here are two that look awesome.

New Fire RPG. It’s an independent, rules-light RPG that was released by kickstarter in 2012 and is available in Drivethru RPG now.  The setting is influenced by a gestalt of pre-columbian Mesoamerican cultures.  One thing that caught my eye is that the dice rolls in the underlying rules system don’t specify whether an action succeeds or fails – it specifies who gets control of the narrative.  Also, the goal is not to avoid death, but to die a perfect flower death to sustain the universe.  I tend to like RPGs that lay more in the wargame side of the spectrum rather than the shared storyteller side like this one is, but I’m tempted to buy it just for the setting, which reviews say takes up most of the book.

Dragons Conquer America. The kickstarter for it funded earlier this year, although you might be able to do a late pledge.  It hasn’t released yet.  It’s an fantasy alternate-history version of 16th century Mesoamerica, but with dragon riders.  It looks like they have Mexica, Tlaxcalteca, Maya, and Europeans options, with different classes for each.  The kickstarter touts their harsh and realistic core mechanic, as well as their spirit/corruption secondary mechanic.  Plus, here be dragons.  One interesting twist is that the dragons only accept female riders, with European dragons being scale and the American dragons being plumed.  The art is beautiful and the video makes me want to buy this one, also.

And if you already have a game system you’re comfortable with and just want the Mesoamerican fantasy setting for it, it may already exist.  Here are settings for popular systems.

I love reading books to absorb details of a culture.  Movies and TV shows can be good for that, too.  Sadly, the english-speaking world has a dearth of Mesoamerican-inspired fantasy.  The only ones I can find are the following.

Obsidian and Blood Trilogy by Aliette de Bodard. This is an Aztec noir fantasy mystery.  I’ve never read anything else like it.  The protagonist is the high priest of the underworld in Tenochtitlan, and the first book starts with a closed-room murder mystery.  It starts slow, but picks up later in the book.  I haven’t read the other two books in the series yet, but it’s on my to-read pile now.  Even if you’re not interested in the trilogy proper, check out the link – she lists resources at the bottom for people interested in the topic and has a series of articles that discusses the Aztecs in rather more world-building-useful detail than many encyclopedias.

Connected to the trilogy, but separate, are three prequel short stories Obsidian Shards, Beneath the Mask, and Safe, Child, Safe.  They’re free on her web site.  Also, she’s written about a million short stories and set in the Xuya universe, which is an alternate history sci-fi where China discovers the America’s early, and China and the Aztecs become the dominant powers.

Firekeeper Saga Jane Lindskold. I’ve read the first few of these books and it’s sort of Jungle Book set in the Riftward setting.  I liked it well enough, but went on to other books before the end of the series was published.  Supposedly a Mesoamerican setting is introduced later in the series, but I can’t personally affirm that.

And there’s a few books that i haven’t read, but other people recommended.

I’m sincerely hoping that my list isn’t comprehensive, because I’ve read more books than this in a good month.  Mesoamerica is one of the cradles of civilization and has a rich tradition that’s completely different than the D&Desque settings we normally see, and it’s fun to see different takes on the idea.

Please let me know if I’ve left any out, and I’ll update over time.