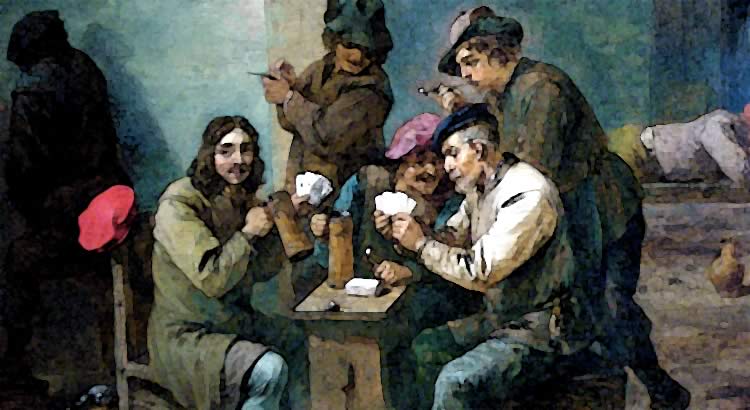 Previous: Chapter 1: A Damsel in Distress

Going back to the school covered in blood and dirt and saliva was out of the question, but the Fish was close by and Manny would let me clean up enough to pass Miss Agnaste’s minimum hygiene threshold.  I hoped.

Tog was at the door. He saw me coming, then paused to sweep a bow as I got there. “Good evening my oh-so-glamorous lady,” he smirked, “To what do we owe the honor of your visit to this here fiiiine establishment?”

“Fuck you, Tog. And don’t tell Mama I said that. I’m covered in blood, my headdress broke, my hair probably looks like a rat’s nest, and I ripped my second-best dress. My crappy day has ended on a truly underwhelming note, and I don’t need you patronizing me on top of it all.” I tried to hold on to my righteous anger, but the crappiness of the day hit me hard, and I was horrified to hear my voice crack just a bit toward the end.

He grimaced and looked down at his feet. “Shit, Scathach, you know I didn’t mean anything by it. I’m all for you being a townie and fancy and shit.” He looked at me closely, “That’s still what you want, right?”

I sighed, “Yeah. I do. I mean, I do…It’s just not as easy as I thought, you know? I don’t know.” I rubbed my face and grimaced at the smear of fluids that left on my hand. “I’m just taking a break, not giving up altogether. Is Manny in?”

“Not right now, but he should be in a couple minutes.” He said, leaning back, ” He’s in the back with Simón getting the mead blessed,” he said.

“Going. Dad’s stretched a little tight getting the coatls saddle-broke, so I thought I’d visit and help out for a while.  ‘Till Nob gets back, anyway. You going to be okay by yourself for a while here in town?”

“Yeah, I’ll be fine. I just had a bad day, that’s all.  You don’t need to babysit me ALL the time. Take care of yourself, Tog.”  I went to give him a hug, but when he stepped back with a grimace, I just sighed and pushed through the doors.

Inside the tavern, I could see everyone focused on Leon telling one of his stories at the front. He was on a roll tonight, winding the story from nobles and romance to battles and animals and gods and crafty peasants and everything else. I found myself relaxing and getting drawn in to the story when I felt the door open again.  My friend Lupe walked through, and I was torn between being glad to see her and hoping that she wouldn’t see me in this state. Her asymmetrical hairstyle looked passionate and exotic as the feathers wound around from her crown to her neck. Somehow, I didn’t think my gore-coated, lopsided coif had quite the same effect. I started to sigh again and then caught myself. Ladies aren’t petulant. I needed to work on this sighing habit I was starting to pick up.

The door behind the bar opened and I saw Manny saunter in.  I made my way to him, trying to blend into the background. It was easier than it really should have been.  Alcohol, dark lighting, and an entertaining speaker do wonders for my ability to be stealthy.

He didn’t say anything, just eyed me carefully.

“I know I said last time that that would be the last time, but clearly…I mean I’d really appreciate it if you’d let me…” and then I stopped talking as he turned around and walked through the door behind the bar, clearly assuming I’d follow.

I said a quick prayer to Ometezca in thanks for getting me out of this fiasco without having to explain it.  With a wolf inside, I really belonged to Huitzolte, but it was clear that His Brother of Disasters and Chaos was the one looking out for me lately.

As had hoped, he poured me some water and got out some clean rags, soap, a needle and thread, a comb and a mirror.  When I got back to the tavern, he gave me another appraising look and handed me some pulque. One sniff told me it was both sweeter and more alcoholic than was usual.  All without asking any questions or providing commentary.

I swear, if he weren’t older than my father and didn’t spend all his time with a bunch of good-for-nothing lowlifes, he’d be the perfect man.

Well, except the other women, maybe.  And the drinking.

Halfway to the door, I turned back. “I need some food to take with me, and I have…uh, three pence on me. What do you have?” I asked Manny.

Manny raised an eyebrow at me while he reached into some apparently magical tiny kitchen that he kept under the bar and started putting together a sandwich, which was a nice touch.  I had gotten a taste for the town food in the few months I’d lived here, and he apparently had noticed that I tended to order it as a pick-me-up when I needed to remind myself how much better everything would be when I was a successful townie.  I swear, that man is the most prepared person I’ve ever met.

He raised the other eyebrow at me. I just sighed.

Next: Chapter 3: In the Room with Ralph